10 Billion Dollar Companies That Started In Garages: Amazon, Microsoft, Most of us have heard that these companies started from a garage. But do you know? There have been a lot of startups that started from the garage and today their business is multi-national. 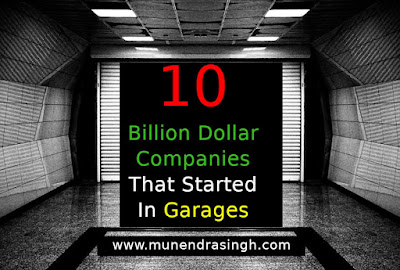 These businesses have become a billion-dollar company today. Their owners are among the world’s wealthiest people today. This is the inspiration for us that the beginning of any task does not matter. Where do you start from where and where you reach it? it matters to a lot, dear friend!

So, let’s read about some of these companies, one by one:

In the year 1994, Jeff Bezos started an online book store in a garage in Bellevue, Washington. In 1995, the first book was sold on Amazon.com. The bookstore was launched publicly by Jeff Bezos in 1997. Today you can see Jeff Bezos, owner of Amazon is one of the richest people in the world. Nowadays, Amazon.com company is the world’s largest online retailer.

Google was launched in a garage by Larry Page and Sergey Brin in the year 1998 at Santa Margarita Avenue, in Menlo Park, California. They had rented this garage from a friend, Susan Wojcicki. Both of them worked hard for a long time day and night to set up a company, today which we know as Google.

Today, most of the products we use in our mobiles such as Google-map, Google-Drive, YouTube, Android, Blogger, Hangout are all Google’s products.

Walt and Roy Disney made their first film in the year 1923 in the garage of their uncle, Robert Disney, in Los Angeles, California. He began his career by making “Alice Comedies”. Today Disney is the world’s highest-grossing entertainment company.

Steve Jobs and Steve Wozniak launched Apple in 1976 at the age of only twenty-one and twenty-six. He started his business by building his first Apple computer in a garage in Los Altos, California. So, this amazing brand was also started in a garage.

In 1939, Bill Hewlett and Dave Packard founded HP in a garage. They only had $ 538 to spend at that time and today as we can see they invested only that money and converted it into billions of dollars! Their first product was an audio oscillator.

Walt Disney was one of his first customers to purchase eight oscillators to produce a sound system for a Fantasia movie.

Tony Maglica came to America from Croatia in 1950 but did not have much money, so after saving $ 125 in 1955, he started working in a garage in Los Angeles, California. He incorporated the Mag Instrument in 1974 and released his first flashlight in 1979.

In 1901, 21-year-old William S. Harley had planned to power the bicycle with an engine. But two years later, he changed plans, and Harley and his childhood friend Arthur Davidson made their first motorcycle in Milwaukee, Wisconsin. Today, Harley-Davidson is a well-known brand motorcycle.

In 1975, Bill Gates and Paul Allen founded Microsoft from a garage with few limited resources. Microsoft did not create software and hardware like Apple, they focused only on software. Working with IBM, he licensed his first operating system for only eighty thousand dollars. Now, it is completely capturing the entire market of computers by its amazing OS.

In 1948, Anthony Colin Bruce Chapman started Lotus Cars at the age of 20. The company was started in a garage in London, United Kingdom. Today ‘Lotus Cars’ is one of the world’s respected racing car manufacturers.

Michael Kittredge was only 16-years-old in 1969 when he started something that became the Yankee Candle Company, later. This candle master made an aromatic candle using melted crayons as a gift to his mother.
Neighbors liked this candle and expressed their desire to buy it. Four years later he built a candle-making mill for his company in Holyoke, Massachusetts.
I hope you liked this post “10 Billion Dollar Companies That Started In Garages” and you have also got a motivation. If they can start such a big company by starting from a garage with limited resources, then we have all the facilities, Why can’t we? Thanks for reading!